Why Dutch is so easy

If you're learning Dutch, or interested in learning Dutch, you may have heard people discuss the similarities between Dutch and English; perhaps someone has encouraged you by telling you the languages are incredibly similar. Indeed, with the exception of Frisian (Frysk), Dutch is the closest existing language to English — naturally, this makes Dutch particularly easy to learn, as similarities abound.

Below, we outline a few of the many reasons English speakers find Dutch an easy language to learn:

Dutch is 'genetically' one of the closest languages to English

With the exception of Frisian, Dutch is linguistically the closest language to English, with both languages being part of the West Germanic linguistic family.

These means many Dutch words are cognates with English (meaning they share the same linguistic roots), giving them similar spelling and pronunciation.

This linguistic closeness also means the grammar of Dutch is similar to English; although there are differences, such as Dutch retaining grammatical gender (a feature of many languages, like French, German Spanish), Dutch and English have both abandoned the convoluted case system found in German, Russian, Finnish and others. 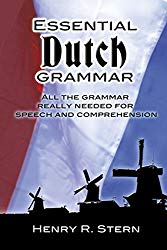 If you speak English, you're in luck — you already know a large number of Dutch words! Words like warm, water, dune, holster, yacht, and walrus, to name only a few.

If Dutch and English weren't already similar enough, loanwords play a significant role. Dutch people readily use words taken from English. For instance, you might hear people discussing “out-of-the-box” thinking during a “whatsapp” conversation after having “genetflixt”, but hopefully their “badhairday” doesn't send them to “intensiev care”!

It sometimes goes beyond this, and a Dutch conversation will have so many English words that you'll find yourself being able to follow along.

Dutch has no case system

Unlike German, Russia, Finnish, Icelandic, Japanese, Korean and others, both English and Dutch have no case system. As learners of any language with cases know, it's an endless frustration needing to remember the various forms of words. Thankfully, Dutch has no case system at all! No having to remember der, des, dem, den, die, etc.

While you might not truly appreciate the frustration of grammatical cases if you've never tried learning a language featuring them, be thankful they're absent in Dutch...

Forgot to brush up on your Dutch? Not feeling too confident? You're in luck! The vast majority of Dutch people speak English, often flawlessly. In fact, 90% of Dutch people can speak English enough to converse comfortably, compared to only 39% in France, 22% in Spain, and 27% in Portugal. (Source

Dutch people are happy to use English in conversation, and will not think you're being rude if you ask to switch to English.

As mentioned above, most Dutch people speak English.

Because of this, many visitors unfortunately make no attempt to learn the language — why, they reason, learn Dutch when these people already speak English? There are many reasons this is a bad and arrogant attitude (employers will often require some level of Dutch proficiency or expect you to learn), but there's an upside to this situation: Dutch people tend to be far more grateful to those who put in the effort to learning Dutch. Even if you make mistakes, they'll appreciate that you're learning.

This can make conversations easier, and instantly a little bit friendlier. It's always worth putting in the effort, even if you intend to learn only a few basic words and phrases.